The hierarchical data base tree structure is shown in the figure below for customer database. 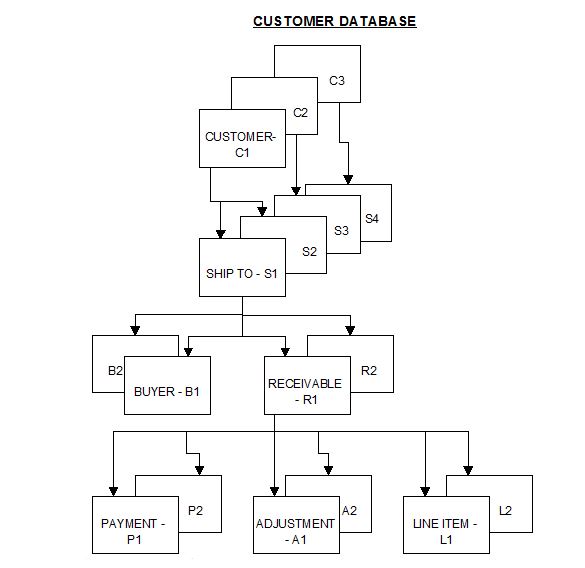 A DL/I data base record consists of clusters of data fields, which are called SEGMENTS. A segment represents the smallest unit of information that DL/I transfers to and from the program in an I/O operation.

Each segment consists of one or more data fields. A single segment type or multiple segment types can be defined at each level of the data base. The single segment at top of hierarchy - the one from which all the other segments eventually derive is called ROOT segment. Only one root per data base record.

In the customer data base example, there are four levels and there are multiple segments at some levels. DL/I allows to implement structures that are more complex in nature, with 15 levels and 255 different segment types in a data base.

Segment type is simply a category of data.

In customer data base example there are seven segment types and each is represented by one of the boxes. There are three occurrences of the customer segment type in the above example (C1, C2, C3) which means that three customers information is stored in the data base.

The terms Parent and Child are used to describe the relation ships between segment types.

To retrieve a data base record all the segments (Root and dependent) and segment occurrences will be retrieved in a specific sequence which is called as Hierarchical Path. The path is an imaginary line that starts at the root segment, passes through all segment types at intermediate levels in the hierarchy. The path followed is Top - down and Left to Right.

If you have any doubts or queries related to this chapter, get them clarified from our Mainframe experts on IBMMainframer Community!