In this session, youâre going to see what happens when you type an address into your web browser and press Enter.

Each application you write in Django consists of a Python package\Apps that follows a certain convention. Django comes with a utility that automatically generates the basic directory structure of an app, so you can focus on writing code rather than creating directories.

Whatâs the difference between a project and an app? An app is a Web application that does something â e.g., a blog system, a database of public records or a small poll app. A project is a collection of configuration and apps for a particular website. A project can contain multiple apps. An app can be in multiple projects.

Your apps can live anywhere on your Python path. In this example, weâll create our helloworld app in the same directory as your manage.py file so that it can be imported as its own top-level module, rather than a submodule of 'myfirstsiteâ.

To create your app, make sure youâre in the same directory as manage.py and type this command:

Thatâll create a directory helloworld, which is laid out like this:


I am going to use Visual Studio Code. Itâs a lightweight but powerful source code editor which runs on your desktop and is available for Windows, macOS and Linux. It is a small download so you can install in a matter of minutes and give VS Code a try. https://visualstudio.microsoft.com/downloads/

Step1: Open your project folder 'myfirstsiteâ in VS Code 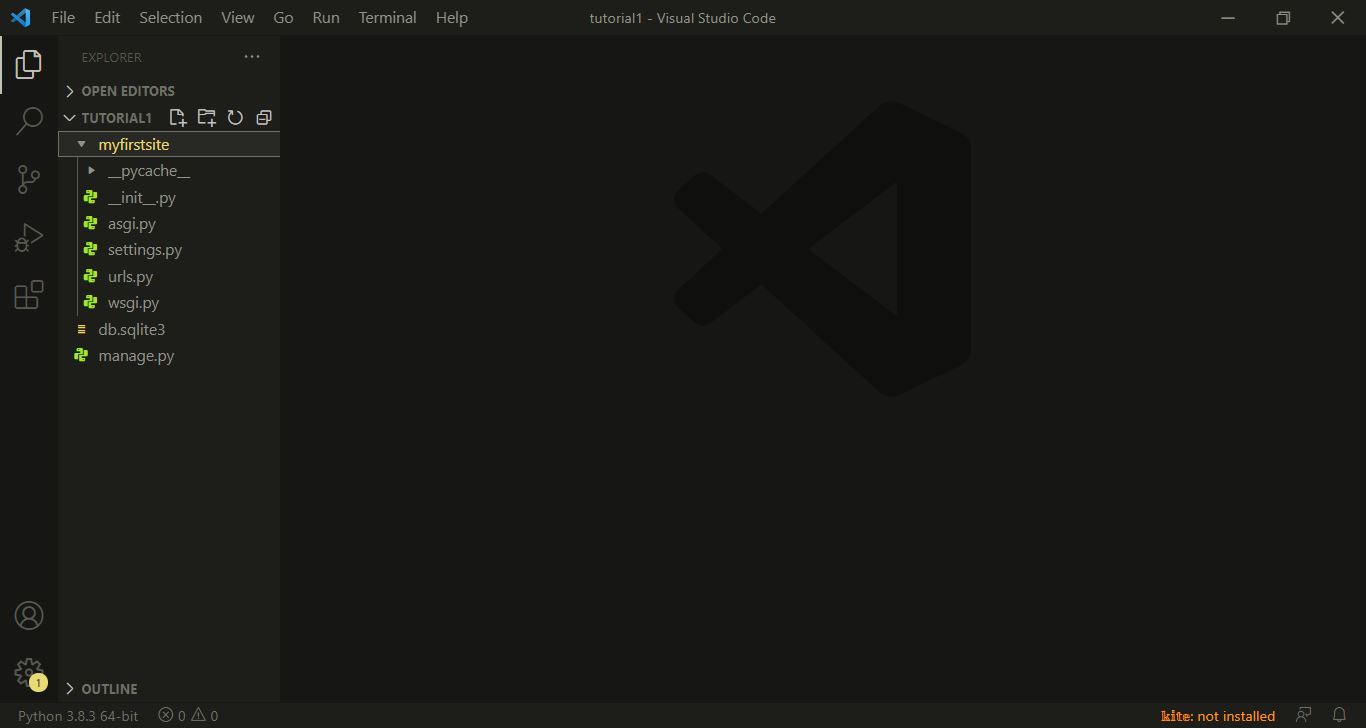 Step2: Write your first view. Open the file helloworld/views.py and put the following Python code in it:

You may see an error at line return HttpResponse because HttpResponse function is not imported from http Package. Add the following code:

This is the simplest view possible in Django. To call the view, we need to map it to a URL - and for this we need a URLconf.

Step3: create a URLconf in the helloworld app

To create a URLconf in the helloworld app directory, create a file called urls.py or copy urls.py from project folder myfirstsite and remove all the lines in it. Your app directory should now look like:


In the helloworld/urls.py file include the following code:


So you will have,

The next step is to point the root URLconf at the helloworld.urls module. In myfirstsite/urls.py, add an import for django.urls.include and insert an include() in the urlpatterns list, so you have:

The include() function allows referencing other URLconfs. Whenever Django encounters include(), it chops off whatever part of the URL matched up to that point and sends the remaining string to the included URLconf for further processing.

NOTE: You should always use include() when you include other URL patterns. admin.site.urls is the only exception to this.

You have now wired an index view into the URLconf. Verify itâs working with the following command:

The path() function is passed four arguments, two required: route and view, and two optional: kwargs, and name. At this point, itâs worth reviewing what these arguments are for.

route is a string that contains a URL pattern. When processing a request, Django starts at the first pattern in urlpatterns and makes its way down the list, comparing the requested URL against each pattern until it finds one that matches.

For example, in our request to

When Django finds a matching pattern, it calls the specified view function with an HttpRequest object as the first argument and any âcapturedâ values from the route as keyword arguments - https://www.example.com/helloworld/?page=3.

when you type an address https://www.example.com/helloworld/ into your web browser and press Enter. Django finds a matching pattern, it calls the specified view function index with an HttpRequest object as the first argument.

Arbitrary keyword arguments can be passed in a dictionary to the target view. We arenât going to use this feature of Django in the tutorial. https://www.example.com/helloworld/?page=3 â we will see kwargs in the upcoming examples.

In myfirstsite/urls.py, add an import for from helloworld import views and insert an path() in the urlpatterns list, so you have:

Go to http://localhost:8000/ in your browser, and you should see the text âHello, world.â, which you defined in the index view.

Congratulations! You have successfully completed basic Django request and response tutorial session. Let us move to the next topic Django Models.