What is a computer programming languages?

Computer programming languages allow us to give instructions to a computer in a language the computer understands(Machine Code 0 & 1). Just as many human-based languages exist, English, French, Hindi, and Tamil.

A translator is a programming language processor that converts a computer program from one language to another. It takes a program written in source code(like Python, Java, JS..) and converts it into machine code 0 & 1. It discovers and identifies the error during translation.

There are 3 different types of translators as follows:

Some examples of translators per type:


Python usually uses an interpreter and an interpreter just like a translator goes line by line through your code and executes source code on our machine.

Python is a popular programming language that lets you work quickly and integrate systems more effectively. It was created by Guido van Rossum, and released in 1991.

It is used for:

Keys points to be noted for Every Python Programmers:

In most programming languages, indentation is used to properly structure the code. In contrast, python used for grouping the block of code, making the code automatically structured and easy to read. 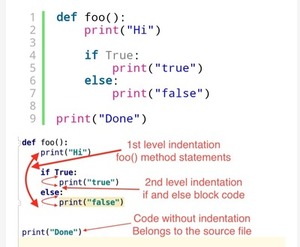 Keywords are part of the syntax. It is predefined, reserved words used in a programming language that have special meanings to the compiler and cannot be used as an identifier.

if, for a conditional statement

True\False, a Boolean value, the result of comparison operations

The complete list of keywords available in python docs

Expression is a combination of variables, operations and values that yields a result value.


A statement does something. Statements represent an action or command e.g print statements, assignment statements.


If you have any doubts or queries related to this chapter, get them clarified from our Python Team experts on ibmmainframer Community!

⇑ Back to top Next ⇒