Getting Started with Django

Throughout this tutorial, weâll walk you through the creation of an initial Django application.

Weâll assume you have Python & Django installed already. If it isnât, you should see previous our section Django Introduction & System Setup

This tutorial is written for Django 3.2, which supports Python 3.6 and later. If the Django version doesnât match, update Django to the newest version. If youâre using an older version of Python, check What Python version can I use with Django? to find a compatible version of Django.

If this is your first time using Django, youâll have to take care of some initial setup. Namely, youâll need to auto-generate some code that establishes a Django project â a collection of settings for an instance of Django, including database configuration, Django-specific options and application-specific settings.

From the command line, cd into a directory where youâd like to store your code, then run the following command:

This will create a myfirstsite directory in your current directory.

Letâs look at what startproject created:

â¢ The outer myfirstsite/ root directory is a container for your project. Its name doesnât matter to Django; you can rename it to anything you like.

â¢ manage.py: A command-line utility that lets you interact with this Django project in various ways. You can read all the details about manage.py in django-admin and manage.py.

â¢ myfirstsite/__init__.py: An empty file that tells Python that this directory should be considered a Python package.

â¢ myfirstsite/settings.py: Settings/configuration for this Django project. Django settings will tell you all about how settings work.

â¢ myfirstsite/urls.py: The URL declarations for this Django project; a âtable of contentsâ of your Django-powered site. (list of entry point to your site)

â¢ myfirstsite/asgi.py: An entry-point for ASGI-compatible web servers to serve your project. (This file will be used for deploying your site to live)

â¢ myfirstsite/wsgi.py: An entry-point for WSGI-compatible web servers to serve your project (This file will be used for deploying your site to live)

Now, itâs a time to re-check this below diagram MVT request and response calls,

Youâre going to see what happens when you type an address into your web browser and press Enter.

If these lines are not clear. don't worry, you will see an example in the next session.

The outer myfirstsite / root directory is a container for your project. Its name doesnât matter to Django; you can rename it to anything you like. So, I am changing it to tutorial1.

And move into the outer tutorial1 directory

And run the following commands: (This command will start the development server)

Youâll see the following output on the command line:


Note: Ignore the warning about unapplied database migrations for now; weâll deal with the database shortly.

Youâve started the Django development server, a lightweight Web server written purely in Python. Weâve included this with Django so we can develop things rapidly, without having to deal with configuring a production server â such as Apache Tomcat â until youâre ready for production. 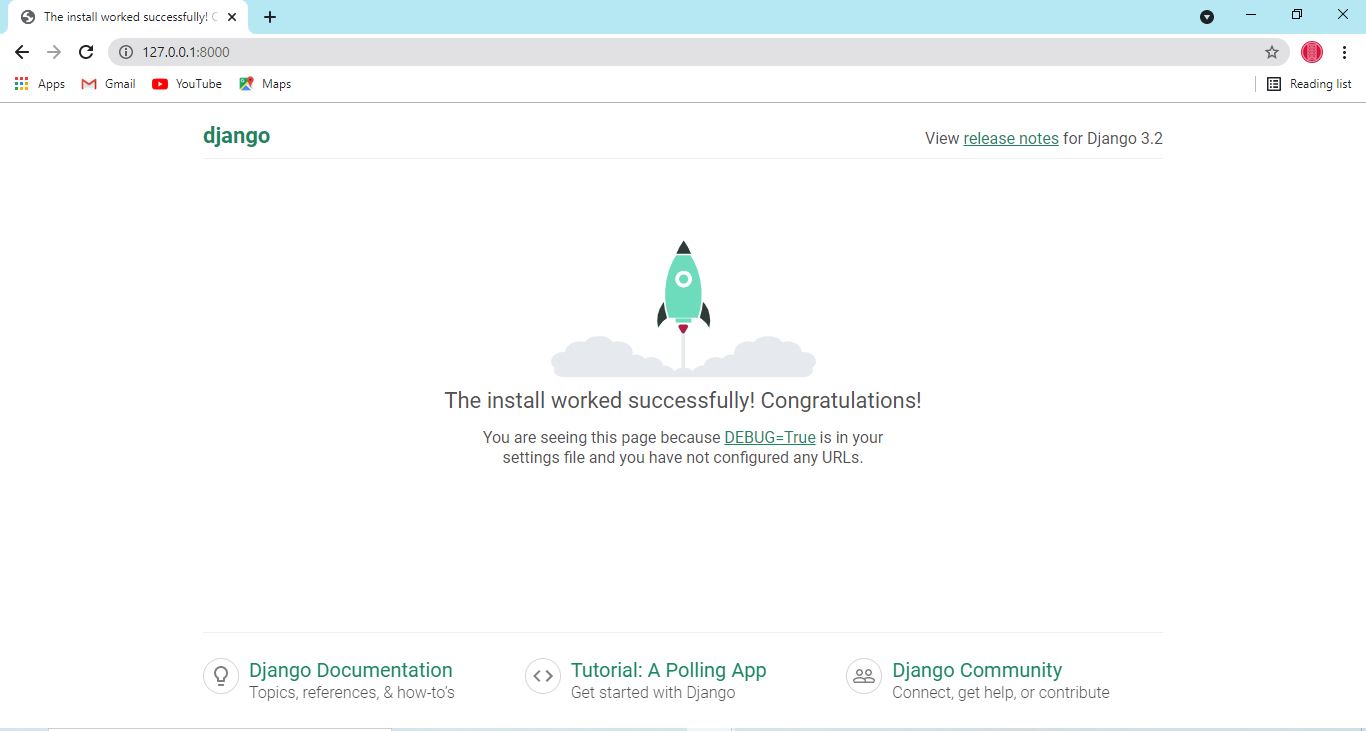 You will see an additional db.sqlite3 file created when we run command python manage.py runserver. We will see this file in the database session.

By default, the runserver command starts the development server on the internal IP at port 8000.

If you want to change the serverâs port, pass it as a command-line argument. For instance, this command starts the server on port 8080:


If you want to change the serverâs IP, pass it along with the port. For example, to listen on all available public IPs (which is useful if you want to show off your work on other computers on the network), use: